We will start by explaining that regular cannabis seeds have a 50% probability of being male and another 50% of being female, following the rules of nature. This has allowed regular seeds to become very popular with breeders and growers looking to create new strains and genetic varieties of cannabis. This is because males produce pollen that farmers use to fertilize female flowers, creating the next generation of seeds.

These seeds are created naturally with the pollination of a male to a female. They are the result of how cannabis arose in nature and there is no greater manipulation on the part of humans when making this type of strain. Pure regular genetics, that is, those that have not been hybridized, can be traced back to indigenous ancestors found throughout the world from the mountains of India to the warm areas of Central America and South America also passing through the mountains, valleys, and coasts of Africa. We must point out that breeders have also created regular hybrids, combining genetics from different species. This produces new varieties that express the traits of parental males. For example, at Blimburn Seeds Bank, we offer you Agent Orange regular, a variety that is a cross between Orange Velvet x Jack The Ripper. Its parents give it really refreshing and delicious fruity flavors of orange and citrus that can be savored in each puff.

These seeds are recommended for growers who are looking for male and female plants. They are also recommended for breeders who are looking for specific qualities in their crops such as flavor, color, aroma, and more. and as we already said, having cannabis plants of both sexes will allow you to create your own strains through exclusive genetic crosses.

Here, we present you Jilly Bean regular, a strain in which you will find incredible flavors with notes of spicy pine herbs, pepper aftertaste, and also fruity tones of orange, tangy, and mango. It is a real bomb that fills the air with its dense and particular smoke. Another characteristic that makes regular Jilly Bean remarkable is its short flowering that takes roughly 50 -65 days indoors with an abundant harvest. This strain produces 400gr – 500gr/plant outdoors and 400gr/m2 indoors. 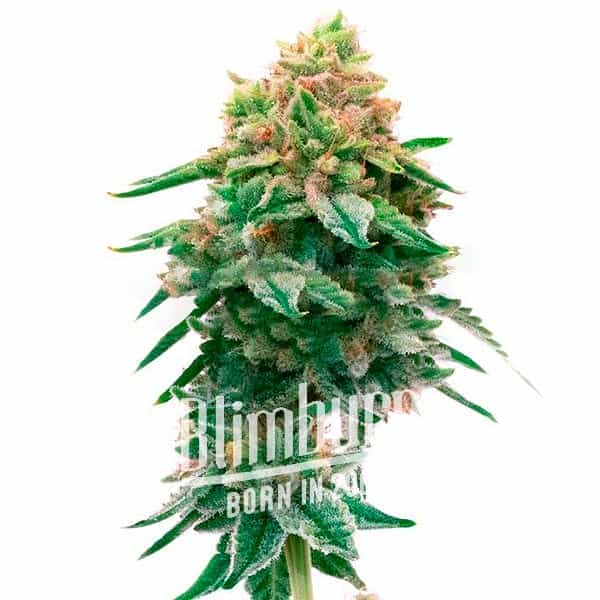 As you can see with the two varieties that we show you, you can select plants with the traits that you like and use them to create your own personalized varieties. With this selection process, you can modify any traits such as the terpene profile, the cannabinoid content, the productivity, and the size of your new regular cannabis strains. Another point in favor of regular seeds is the creation of cuttings because with cloning, you can skip the germination phase and create an exact genetic copy of a selected plant from this type of seed which are known to produce vigorous clones.

What are the pros and cons of regular seeds?

They have a great variety of genetics from both the old school and the new school. Therefore, they allow the massification of strains throughout the world, preventing their disappearance. They produce cuttings much more powerful and vigorous than other types of seeds. They are perfect for propagation through clones.

Growers who are fans of cannabis with genetic diversity will be able to make a pollen bank collected from the males they have. They are ideal for the production of new seeds and marijuana varieties.

Until plants declare their sex, growers live in uncertainty. That is why the little certainty of sex in the early stages be a disadvantage. If you are an inexperienced grower, you may misidentify a male and female. If you accidentally left a male in the cultivation salt along with the females, their flowers will be pollinated, lowering the quality of those buds.

As a requirement, breeders must have separate indoor or greenhouse cultivation systems. In one of the systems, they can have female plants and male plants in the other, thereby avoiding unwanted pollination.

First of all, feminized seeds were made to optimize and make the experience of growing female plants more pleasant for gardeners. This is because there is a 99% probability of having a female plant that delivers heavy yields with large buds when growing this type of seed.

Feminized seeds are born after crossing a female with another female. Breeders use a technique called reversion to force female plants to produce pollen as males. They then fertilize another female whose flowers produce a generation of feminized seeds.

We want to clarify that the reversion is done through the use of colloidal silver, a solution that is sprayed on the plant and promotes the appearance of pollen bags as in male plants. This reaction is due to the production of levels of ethylene in specimen tissues, causing plant breeders to force female plants to produce pollen sacks.

Another method occurs naturally and is when female plants do not have male specimens by their side. On some occasions they tend to self-fertilize, autonomously producing seeds. This means that when they produce the well-known “bananas”, the bags with pollen can pollinate other plants, producing feminized seeds in a natural way.

Now, we will show you two of the top feminized strains that we have at Blimburn Seeds for your garden. This selection is made based on plant resistance, production, and also flavors, aromas, and obviously their effects.

Gelato is a hybrid variety of impressive size, measuring up to 2m outdoors and generating impressive yields of 700gr/plant. Indoors, it stands out because it can produce up to 500gr/m2.  Do not stop cultivating this wonderful strain that stands out for its flavors of sweet berry, citrus, and lavender notes. Its effects stand out for elevating users to states of joy and euphoria, ending with a soft relaxation. 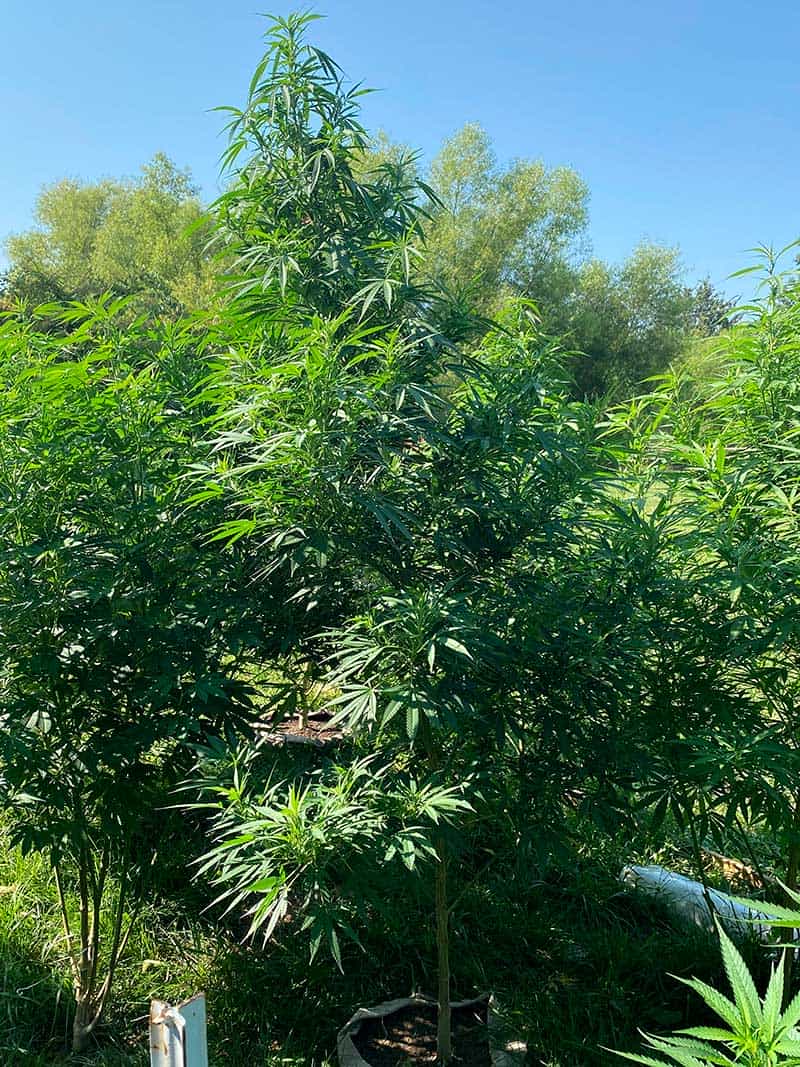 We emphasize that this is a power pump with THC levels of 27% and it is also good to note that it is ready to be harvested in 8 – 10 weeks indoors and outdoors, you just have to wait until the middle of October. All of this has made Gelato one of the most popular feminized strains on the market in the last 8 or 10 years, becoming the favorite of many gardeners around the world.

This feminized variety called Lemon OG is incredible with intense aromas such as lemon and menthol, making smokers fly intensely high thanks to its 20% THC that fills the buds which are covered with an intense resin. It is good to note that this mostly indica variety has citrus flavors of lemon and pine, hence its fragrant aroma that is special for its punch which stimulates creativity, leaves you in a state of happiness, and relaxes you. On the other hand, the feminized seeds of Lemon OG will not leave you indifferent because you can get wonderful harvests of 400gr – 600gr/plant outdoors and for indoors, 450gr – 550gr/m2. To the above, we must add that the flowering is super short only taking 8 – 10 weeks indoors and ready to be harvested in October if you grow it outdoors.

These types of seeds are called autoflowering varieties and they receive their name because they can flower without a change in the light cycle, that is, they do not need to go from a cycle of 18 hours of light and 12 of darkness to one of 12 hours of light and 12 of darkness. It should also be added that they are easy to grow with a super fast life cycle that allows them to bloom very quickly. They also have compact sizes that make them very stealthy.

First of all, it must be said that the breeders of seeds use ruderalis genetics to create the autoflowering strains because they contain the automatic traits. One of the fundamental characteristics of ruderalis plants is that they adapted to the shorter growing seasons and colder climates of Central and Eastern Europe. The summer is shorter in these areas, so the rudelaris cannabis plants were forced to automatically start flowering on their own.

The ruderalis cannabis plants need to grow and bloom before the short summer comes to an end and the cold autumn temperatures drop on top of them. It is said that rudelaris cannabis plants developed the ability to flourish depending on the time, climate, and a short life cycle, independent of the hours they are exposed to light.

This makes the difference between autoflowering varieties and feminized or regular varieties because the latter depend on a light cycle both to grow and to flower, unlike automatic ones, thanks to their rudelaris ancestry. The rudelaris parents that give life to autoflowering genetics are characterized by being low in THC with a very compact shrub structure and that produces low to medium yields.

However, nowadays, the work of breeders with autoflowering strains is incredible because they have managed to obtain more powerful and much more productive automatic cannabis seeds. For this reason, many expert gardeners prefer to grow this type of seed because they produce high yields and incredible buds in a shorter amount of time and in less space, thus maximizing their resources.

At Blimburn Seeds Bank, you can buy the best autoflowering cannabis seeds including the 2 strains that you are going to see below.

This autoflowering variety is one of Bilmburn Seeds Bank‘s favorites because it delivers flowers with purple phenotypes and generous harvests. Indoors, you can pick 350gr – 400gr/m2 and about 120gr / plant outdoors. 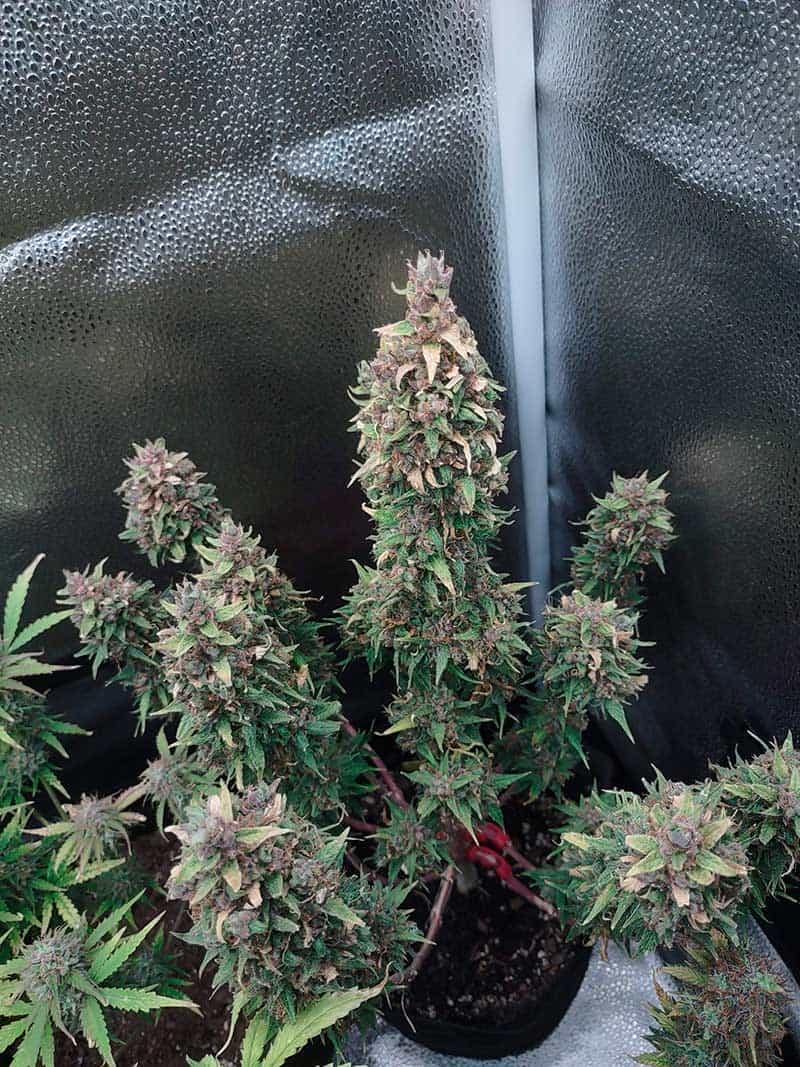 Grizzly Purple auto buds have a potency of 9% – 13% THC with delicious lemon-like and fruity citrus flavors. The buds are ready to be harvested after 70 – 80 days because it is a super fast variety. It also produces relaxing effects that induce sleep, making it an ideal strain for people who suffer from insomnia or want to calm their body aches. 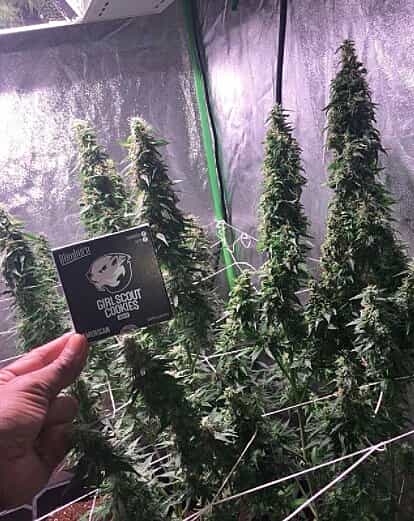 Girl Scout Cookies auto are ready to harvest after 8 – 9 weeks of life both indoors and outdoors. We advise you to grow it outdoors from mid-May because you can harvest at the end of July if your city has a more Mediterranean-type, dry and hot climate. On the other hand, the flavors of this girl are sweet, earthy, and very delicious, even more so considering that they are usually hard as a rock and compact and that they are also covered in sticky resin.

In short, you already know the qualities of these varieties and their main references. In addition, you have our best recommendations of seeds that can be regular, feminized, or auto-flowering, depending on how you like it best. Do not miss the opportunity to buy quality cannabis seeds here at Blimburn Seeds! You will surely not regret it after you see how the jungle grows in your indoor or outdoor garden of cultivation.