Because it is a variety which will be easy to grow in the first place. In addition, it is a strain with a sativa dominance, crossing Haze x White Widow. In other words, thanks to the genetics of the White Widow, anyone who is starting in the cultivation of cannabis can grow our magnificent ORKA.

Our ORKA is a strain that from its first days of flowering will surprise you with strong citrus aromas. It is also a plant that grows vigorously with an emerald green color that becomes a small Christmas tree that can reach up to three meters in height if you grow it outdoors. In addition, a crystalline mantle envelops all the flowers creating resinous and sweet buds.

Secondly, it is a plant that can reach 800 gr/plant. In other words, if you are going to grow our ORKA outdoors, prepare some structure to help the branches that support large flowers. In addition, its flowers are compact and in about 60 to 70 days it is ready for harvest, that is to say in mid-October.

Finally, we can say that it is a quality strain with a citrus and sweet aroma that melts on your palate and its effects go directly to the cerebral cortex providing a relaxing, social and lively stimulation. 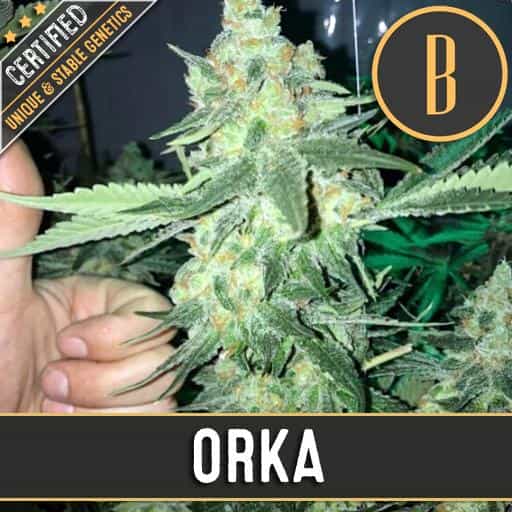 Also, to be clear about the area where we live. We must take into account other important factors in outdoor cultivation in Australia. Firstly, the temperature and hours of sunshine are very important. Also, the location where our small seeds of the ORKA will then become large cannabis plants.

The medium where we grow our ORKA is important. Firstly, we have to be clear if we are going to grow directly on land or on pots.

In conclusion, our culture medium is very important to obtain large resin buds from our ORKA.

Firstly, ORKA is a quality strain and many growers have confirmed to us that it can be grown perfectly in any region of the AUSTRALIA.

In this last point, we highlight the importance of ORKA for your health.

First of all, it is a mostly sativa strain that works mainly on your brain and leaves you in a very high mood.

In addition, at the end of the trip with ORKA, you will feel a smooth, relaxed descent, which allows you to forget the stress after work and have a good time, either alone or with someone.

On the other hand, the lemon and citrus flavors give you sensations of freshness that will allow you to fly to new places.