First, because it comes from the hand of the master Steve`s DeAngelo. Secondly, one of the most sought after varieties. In other words, a plant that can reach a meter and a half in height. In addition, easy to cultivate by any padawans who is beginning in the arts of the culture of marijuana.

STEVE’S HELLFIRE OG  Feminized is a strain of hybrid tendency. Lineage of the powerful SFV OG Kush and one of the best strains of all time, the legendary OG Kush.

Finally, this magnificent strain leaves no marijuana grower indifferent. In addition, from its first days of flowering, it gives herbal, spicy and pine flavor. This great ally is ideal for moments of happiness and relaxation.

However, we didn’t forget the most important thing. It has an indoor flowering period of 8 to 10 weeks, but we recommend 10 weeks for optimal maturation. Also, outdoors you can harvest your crop in early to mid April. 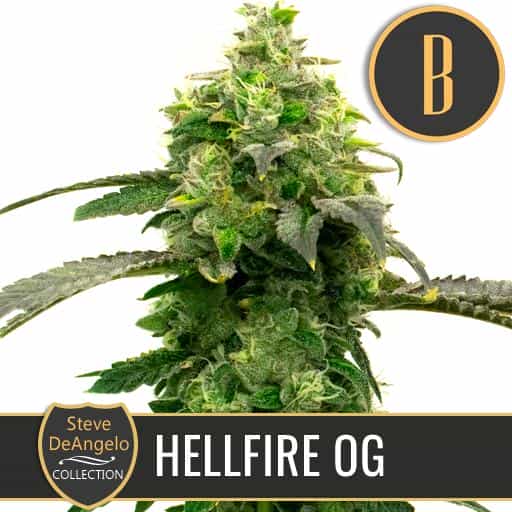 Also, to be clear about the area where we live. We must take into account other important factors in outdoor cultivation in Australia. Firstly, the temperature and hours of sunshine are very important. Also, the location where our small seeds of the STEVE’S HELLFIRE OG  will then become large cannabis plants.

The medium where we grow our STEVE’S HELLFIRE OG   is important. Firstly, we have to be clear if we are going to grow directly on land or on pots.

In conclusion, our culture medium is very important to obtain large resin buds from our STEVE’S HELLFIRE OG.

Firstly, photoperiod 18/6 is very important for the development of any plant. Secondly, at the Outdoor point we reflect how many hours of light our AUSTRALIA-grown plants receive. Finally, outdoors, most strains will naturally enter flowering when there are less than 15 hours of light daily.

Firstly, STEVE’S HELLFIRE OG  is a quality strain and many growers have confirmed to us that it can be grown perfectly in any region of the AUSTRALIA.

Firstly, STEVE’S HELLFIRE OG  is a hybrid strain. Secondly, it has a quality lineage that makes it a potent strain. Also, its effects produce in yourself a high happiness with a great relaxing time

Finally, the set of terpenes provide a mix of smell and flavor between pine, spicy, and herbal, giving a sensational spiritual feeling.