First, because it is mostly indica strain that represents the scene of cannabis of 90 because it is a super old school strain of the USA, West Coast. This strain was born from a cross of the native Hindu Kush per Chemdog. Secondly, these parents give to this variety heavy production yields at 800 gr/plant outdoors.

Thanks to its genetics base, OG KUSH is growing indoors because the production is 500 g/m2 of flowers with lemon and citrus flavor.

However, we didn’t forget the most important thing. It has an indoor flowering period of 7 to 8 weeks, but we recommend 8 weeks for optimal maturation. Also, outdoors you can harvest your crop in the middle of April. 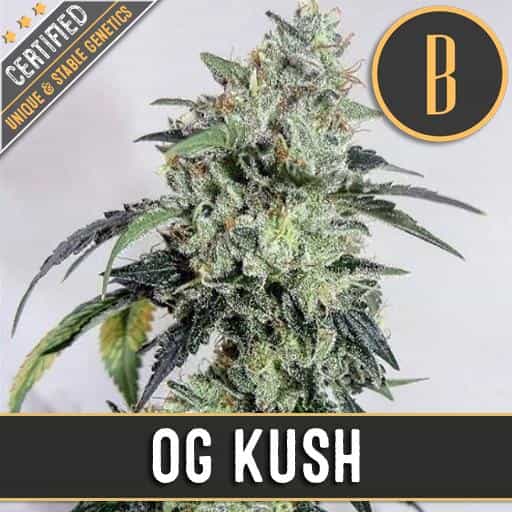 Also, to be clear about the area where we live. We must take into account other important factors in outdoor cultivation in Australia. Firstly, the temperature and hours of sunshine are very important. Also, the location where our small seeds of the OG KUSH will then become large cannabis plants.

The medium where we grow our OG KUSH is important. Firstly, we have to be clear if we are going to grow directly on land or on pots.

In conclusion, our culture medium is very important to obtain large resin buds from our OG KUSH.

Firstly, OG KUSH is a quality strain and many growers have confirmed to us that it can be grown perfectly in any region of the AUSTRALIA.

Firstly, OG KUSH is an indica strain. Secondly, it has a quality lineage that makes it a potent strain that produces a narcotic effect, especially for people suffering pain, insomnia, sickness, migraines or stress.

Finally, the set of terpenes that make up this quality strain provides a citrus and lemon flavor with an effect super relaxing and cerebral.

If you are looking for an easy variety to grow with big production outdoors and indoor and that produces a heavy effect, well OG KUSH is perfect in your garden.