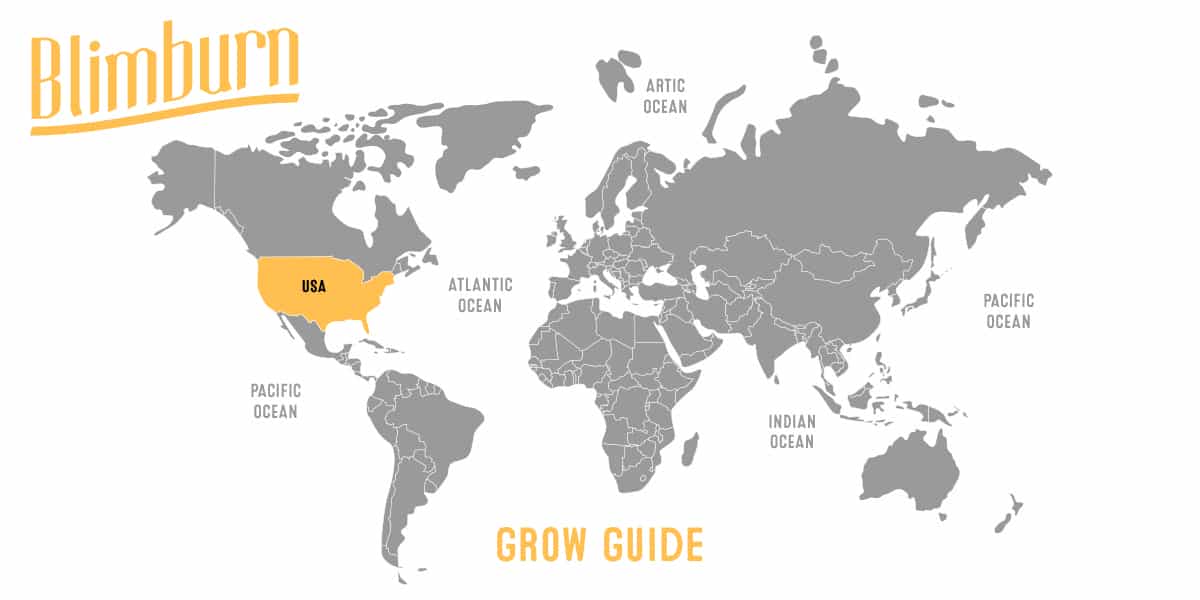 Because it is a high quality strain named after the legendary Steve DeAngelo, one of the founding fathers of the legal cannabis industry.

Steve’s Alien OG Feminized is an indica dominant strain. It has its origins in the mighty Alien Kush and Tahoe OG. In other words, this magnificent strain leaves no marijuana grower indifferent. Moreover, with a citrusy and dank taste, accompanied with spicy notes.

Finally, growing outdoors is a good option in dry, sunny and warm places. However, Steve’s Alien OG, like most of its OG relatives, flourishes on the west coast and other places with a Mediterranean type climate. In other words, since the weather can be fickle, watch for any sudden changes. Some growers have a canvas canopy ready in case of drizzle, while others are willing to move the plant indoors temporarily.

Harvest begins in mid-October in the northern hemisphere and April in the south.

Do you think you can grow outdoors in USA?

Yes, you can grow outdoors in the USA. First of all, please read our seven points carefully. Also, don’t hesitate to contact us with your questions or to place your seed order. Finally, after this introduction we start with the tips and tricks:

In the first place, given the great geographic extension of the United States, different and varied types of climates can be found in different areas of the country for the cultivation of marijuana. Also, from the tropical to the cold and dry climate. Being, in general, the southern region the most temperate and the north the coldest.

In other words, the areas around CANADA are colder.

Also, to be clear about the area where we live. We must take into account other important factors in outdoor cultivation in USA. Firstly, the temperature and hours of sunshine are very important. Also, the location where our small seeds of the STEVE`S ALIEN OG will then become large cannabis plants.

The main types of climates in the country are:

First, it covers mainly the north of the country. Marijuana growers have mild winters, but there are frequent strong drops in temperatures due to the arrival of polar air, producing frequent snowfalls on the highest peaks. Rainfall usually occurs in the summer, which is usually hot and humid.

In the first place, a factor to take into account in this type of climate is the genetics of our plant. If a strain is genetically less prone to mold, you will have less trouble growing your marijuana. In addition, it is important to have a good location for your cultivation and prune to have an aeration zone.

Affects the central United States, from east of the Mississippi River to the vicinity of the Rocky Mountains.

First of all, in this type of climate we have no problems with rain or snowfall. However, high temperatures are a problem. In other words, just like humidity, you must keep your growing areas aerated. In addition, very dependent on irrigation.

The western United States, from southern Alaska to California, has a temperate climate with high moisture content, which causes winters with abundant rainfall.

First of all, it is a climate in which it is important to select marijuana seeds with rapid flowering. In other words, heavy rains can ruin our harvest.

Typical of central and southern California. Climate similar to that on the Mediterranean coast of Europe, with mild temperatures. This considered microclimate is due to the influence of the Pacific Ocean and the proximity of the Rocky Mountains.

First of all, one of the best climates for growing marijuana. Second, it is a climate very similar to the South of Spain.

Covers from the southern half of the west coast to Mexico, the Gulf of Mexico and Florida, including some inland plains. The temperatures are warm all year round and the humidity is very high. In South Florida the climate can be considered monsoon with frequent hurricanes.

First of all, this type of subtropical climate is perfect for the development of our marijuana plants. In addition, the temperature is warm throughout the year. However, due to those monsoons and hurricanes, we must have good facilities, structures or cages. In other words, it is better to be safe than to lose the harvest due to strong winds or rain.

The areas with this climate are Texas, New Mexico, Nevada and Arizona. Great deserts abound there.

First of all, being such a dry climate, the location where we are going to grow our marijuana is important. In addition, it is important to prepare the cultivation soil to provide our plant with sufficient nutrients. It is also important to condition the area with large fans and water abundantly to create more humidity in the environment.

Hawaii’s own climate. It is characterized by its mild and constant temperatures of around 24-25ºC throughout the year. The rains are generous, which favors a very peculiar type of flora and fauna.

First of all, it is a climate that has a perfect temperature for growing marijuana. However, the continuous rainfall can be a small problem when the flowering stage is reached. In other words, our marijuana plant will appreciate the first rains in a vegetative state. But once they are in bloom, you have to protect them with a canvas or plastic.

The state of has different climates. On the coastline it is temperate. But in the rest of the territory it is sub-arctic, with low temperatures and high humidity, the minimum in winter easily reaching -30ºC, which causes areas with abundant snow and ice.

First of all, this type of climate is the most extreme. Second, it is important to wait a little longer to take our germinated plants outside. Third, when September rolls around, marijuana plants begin their flowering stage. Finally, when October has arrived, it is important to move the plants to the greenhouse due to the strong drops in temperature.

Also, this calendar with its hours sun and temperatures. Firstly, it’s important to prevent. In other words, growers in northern USA areas must have canvases in the event of sudden rains or cold days.

The medium where we grow our STEVE`S ALIEN OG is important. Firstly, we have to be clear if we are going to grow directly on land or on pots.

In conclusion, our culture medium is very important to obtain large resin buds from our STEVE`S ALIEN OG.

Firstly, photoperiod 12/12 is very important for the development of any plant. Secondly, at the Outdoor point we reflect how many hours of light our USA-grown plants receive. Finally, outdoors, most strains will naturally enter flowering when there are less than 15 hours of light daily.

Firstly, STEVE`S ALIEN OG is a quality strain and many growers have confirmed to us that it can be grown perfectly in any region of the USA.

Firstly, Steve’s Alien OG is an indica dominant strain. Secondly, it has a quality lineage that makes it a potent strain. In addition, its effects provide an energetic and creative stimulation. However, as time passes you will feel a deep body relaxation.

Finally, it is a perfect strain to bake in the late afternoon after a hard day’s work. Besides stimulating and relaxing it works to reduce stress, depression, pain and arthritis.