First, because SWEETY AUTO It is a mostly indica strain that is born of a cross Sweet Tooth per Lowryder and has a growth of 1.30 m outdoors.

Has this name because is super sweet by the flavor that is a combination of mango, piney, and humidity earthy. The production is from 100 to 200 gr/plant in outdoor

Second, this strain is compact. For this reason it is special for growers who want discreet crops, since it takes up little space and in outdoor cultivation it is completely discreet, so you can grow it on balconies or terraces completely safely.

However, we didn’t forget the most important thing. It has an indoor flowering period of 10 to 12 weeks, but we recommend 12 weeks for optimal maturation. Also, outdoors you can harvest your crop from February to April. 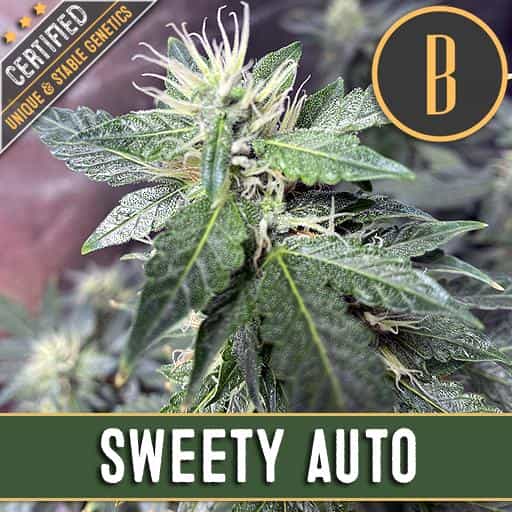 Also, to be clear about the area where we live. We must take into account other important factors in outdoor cultivation in Australia. Firstly, the temperature and hours of sunshine are very important. Also, the location where our small seeds of the SWEETY AUTO will then become large cannabis plants.

The medium where we grow our SWEETY AUTO is important. Firstly, we have to be clear if we are going to grow directly on land or on pots.

In conclusion, our culture medium is very important to obtain large resin buds from our SWEETY AUTO.

Firstly, photoperiod 20/4 is very important for the development of any autoflowering plant. Secondly, at the Outdoor point we reflect how many hours of light our EUROPE-grown plants receive. Finally, outdoors, most autoflowering strains will naturally enter flowering in an automatic way.

When the SWEETY AUTO enter in flowering, need 18 hours of light and 6 of dark

Firstly, SWEETY AUTO is a quality strain and many growers have confirmed to us that it can be grown perfectly in any region of the AUSTRALIA.

In this last point, we highlight the importance of SWEETY AUTO for your health.

First of all, it is a mostly indica strain that induces extreme body-buddz and a great sleepy sensation and calm moment. SWEETY AUTO is perfect for people who need to relieve body aches or symptoms related to fibromyalgia or migraines.

In addition, its fruity and sweet flavor with touches of pine and earth, make this genetics a unique trip to relaxation, since in each smoke you will discover new aromas that will make you fly.

People who suffer from chronic insomnia will appreciate the power of SWEETY AUTO, as it will make them dream in a deep and relaxed way.