Artists Who Use Marijuana For Inspiration 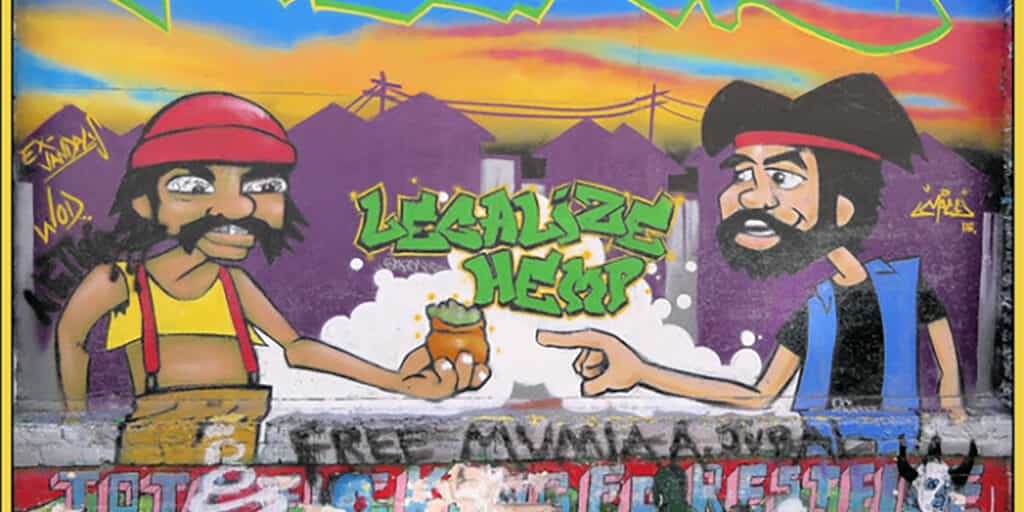 Many famous stoners have publicly declared their love for weed, which is why we want to highlight them in this list. These cannabis lovers say that the pot helps them with inspiration, others with creativity, some connect with their spiritual side. 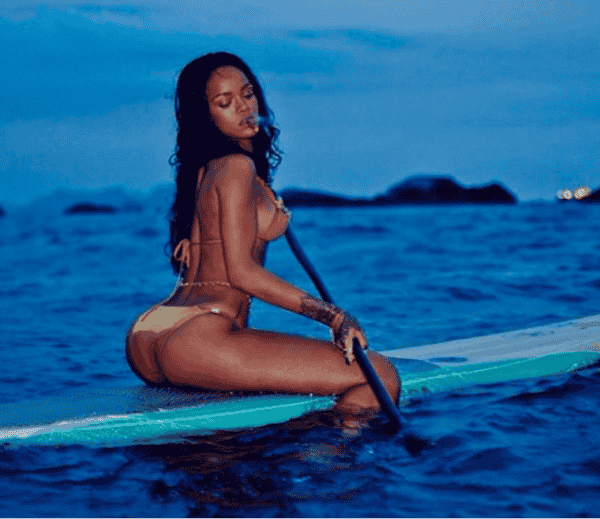 BadgalRiri, as Rihanna is known on social media, is a loyal fan of cannabis, so she never misses the opportunity to smoke a good joint of marijuana.

Rapper, businessman, and good friend of weed Jay Z has stated outright that it is marijuana that helps him think. It seems that Jay Z finds a space for meditation when he occasionally smokes some herb. However, that is not all, since JAY Z is a true marijuana entrepreneur because, the facilities of his cannabis company in San José California, do not go unnoticed. And thanks to his fame, the rapper receives hundreds and thousands of herb worshipers every day who come to his store in search of the best weed. 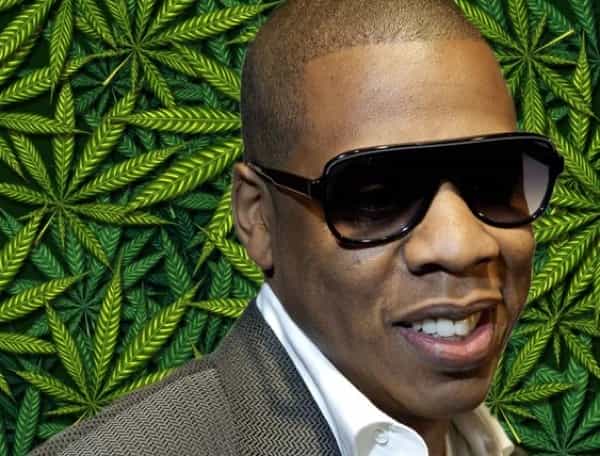 What the famous rapper has achieved with his team is the development of an elite cannabis brand, which stands out for its high quality and for the passionate work on each marijuana cigar that they bring to their customers. Jay Z certainly took her out of the park with this brand that doesn’t appeal to cannabis lovers and the curious.

It is good to mention this pop diva, who affirms that consuming marijuana helps her for the creativity of her musical career. The versatile Gaga, who always surprises with a new image change, has been open with marijuana. 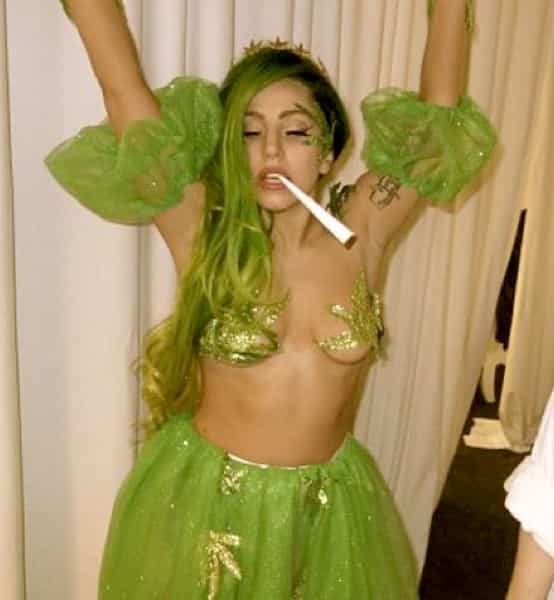 Today Gaga is living a calmer moment with weed, after assuming that she had passed her own consumption levels, abusing ganja, since she was smoking between 15 and 20 joints per day. As the singer herself says, today she only smokes a little at night to lower the stress levels generated by her daily work and to sleep a little more peacefully.

This technology mogul is not far behind and he is also one of the best known references of cannabis. For this reason, in 2012 I supported the referendum in favor of the legalization of marijuana in Washington. 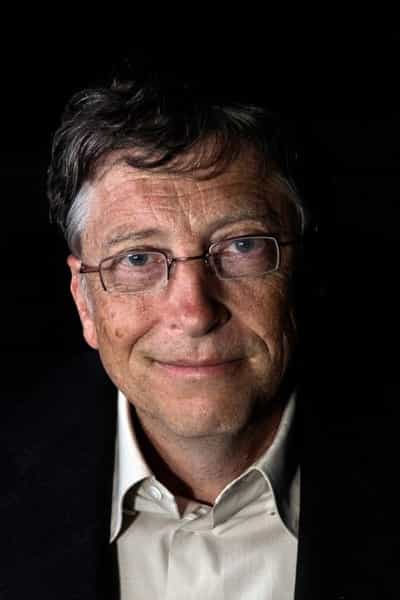 “It would be nice if some states tried this policy before a similar plan is implemented at the national level,” opined the billionaire. Until today, it is not known whether or not Bill Gates consumes cannabis, the only sure thing is that his position is open and leaves no one indifferent.

We must emphasize that the Canadian rapper Drake is an open lover of weed, therefore, he does not hesitate to show himself as a pro pot around the world, achieving an incredible connection with fans of buds and who follow his music. All this is supported by Drake new forays as an investor in the weed market, by partnering with one of the most important companies in the cannabis market. 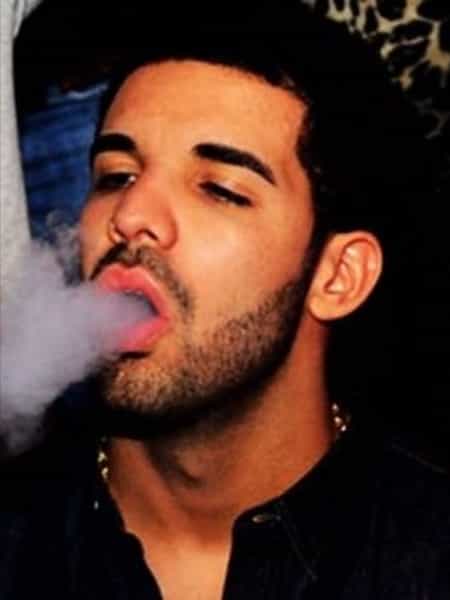 Drake has publicly said that joining a multinational company in the ganja market will allow him to lead a “culture of marijuana focused on the well-being of people” and this is one of the things that motivates him the most to be part of the industry.

We all know how Seth Rogen has been a pot enthusiast for many years, each of his films does not lack the joint or the character who feels the effect of a powerful bud for the first time. Because of that, this mythical cannabis activists and actor could not be missing from this list. 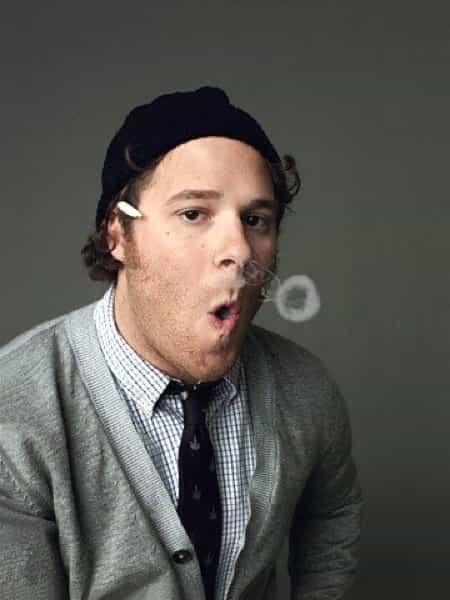 Even more so when he recently launched his own marijuana line and ecommerce store, which collapsed after orders overflowed, having to be temporarily closed due to excess orders from Rogen fans. In this store, also, some varieties of cannabis stand out, which are only distributed in the city of San Francisco, California at home by the actor’s brand.

Goopy Woldberg, the iconic Hollyweed actress is not far behind and despite having to close her first company in the cannabis sector, she is reborn again. That’s right, since Woldberg. He has decided to open a new brand of pot, which will have various products to offer to his followers and which was baptized with the names of his mother and brother. 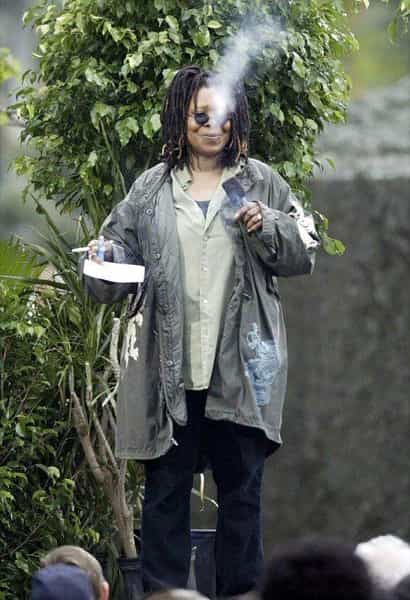 In addition, Goopy takes the time to tell all his work, educate and entertain the audience around cannabis, being the cover face of Black Cannabis magazine, a magazine that is focused on the world of pot, for black people. We should add that the actress pointed out that “it is an honor to be able to inform and entertain black people who are attracted to cannabis, because it is really inspiring.”

This American rapper is known worldwide for being a lover of marijuana and also, for owning his own brand of pot. In every video clip he releases or in every song he performs, you can hear the magic word “Kush”, which comes from the famous “OG KUSH“ genetics. 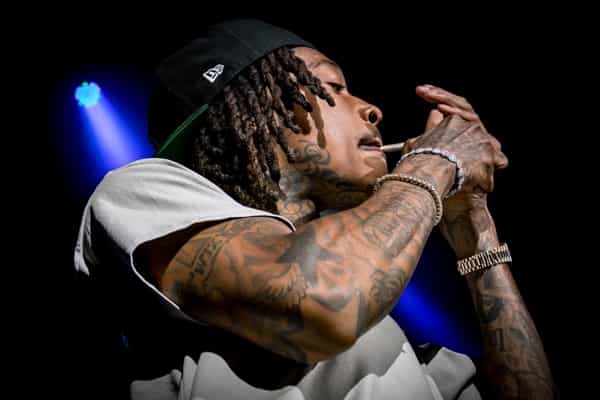 Wiz Khalifa is not only a rapper, but also a tremendous reference in the world of cannabis worldwide. Khalifa not only has its own strain of cannabis because, to that must be added a line of rolling papers, a weed farm  and a partnership with a venture capital company, to promote new marijuana businesses

The singer Miley Cirus has shown herself to be a faithful debota of the pot in iclusive, it is known that she has had different problems with different drugs. After a time of being out of the psychedelic and drug world, Miley is back on the weed. 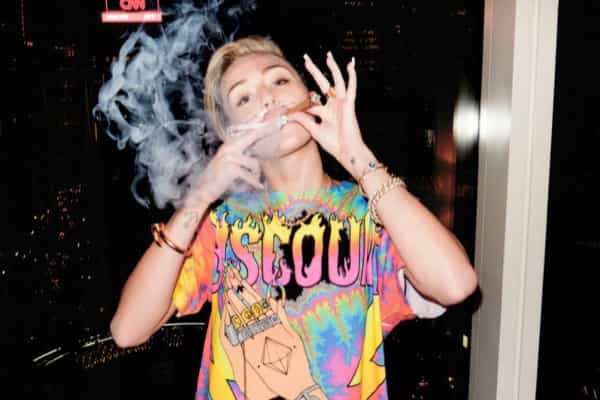 In a statement in a US medium, she said that her mother reintroduced her to the world of cannabis, which has reactivated the fire between the pop artist and the herb. The truth is that it is currently unknown how Cirus is, although she claims that she has been detoxified from all the last time.

The winner of multiple Olympic medals in Beijing 2008, he was suspended for 3 months after those Olympics, because a British newspaper published a photo where Michael appeared with a pipe to smoke marijuana. Because of this image, Phelps became an icon in the pot world and weed lovers endorsed him in a big way, standing out as the fastest man in the water, he was also a marijuana smoker. 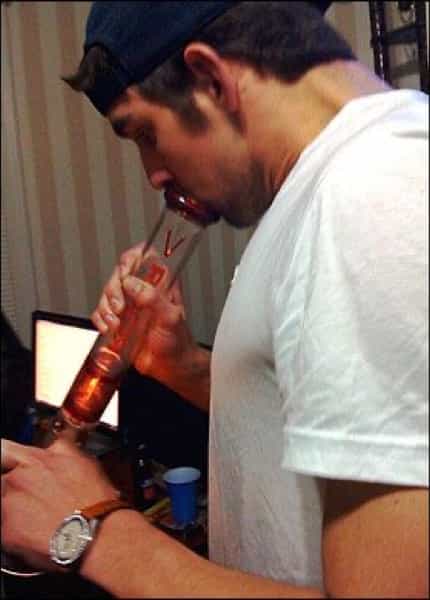 Michael Phelps has never been punished for positive doping for weed consumption because, his records have never been positive, on the contrary, they have always been negative. This has freed Phelps from punishment, who has not hidden his love of ganja.

It is no secret to anyone that SNOOP DOG is the emblem of the famous pot lovers, his love for the plant surpasses all levels because, not only does he dedicate songs to it but also, that he has created one of the most important companies in the cannabis industry in USA, a real empire of weed. In addition, he always has a message about marijuana for his fans, he has even been seen commented on UFC fights, while smoking a marijuana joint. Now, surely you wonder how much marijuana does Snoop smoke a day? Well, we can tell you that this badboy smokes 81 joints per day, a figure difficult to reach. 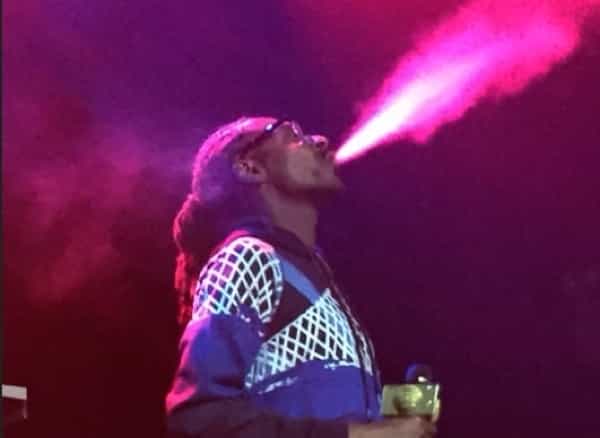 Snoop is probably one of the kings of cannabis in North America and no one is going to take it down from that throne because it is a place that already has well earned, not only because of its business around the cannabis plant but also because of the constant cannabis activism that it carries out. wherever it goes.

Few know that Apple founder Steve Jobs, in his youth, was a user of psychedelics like LSD, to which Jobs attributed characteristics such as unlocking creativity. And also, at that time of the 70s he used marijuana, when he shared joints and hashish among his friends to have a good time. The good thing about all this is that Steve was always honest with his consumption of weed and LSD during his youth, and he always made it clear that he did not have abuse or addiction problems, since he only did it to experiment and travel through other internal spaces. 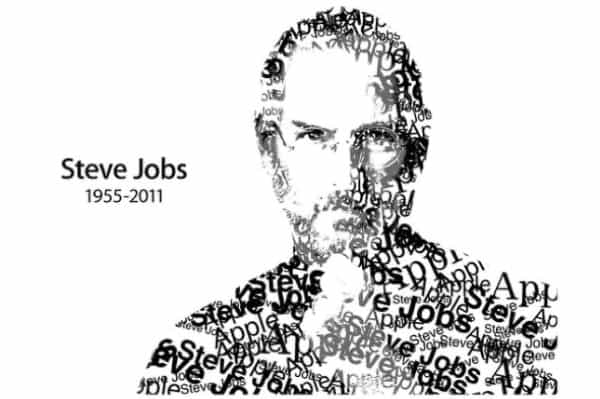 The revelation of Jobs may be the sample that you can try or experiment with some substances such as pot or LSD without being addicted and also, you can become successful without losing your life or being lazy, as the urban myth of the prohibition.

This humorous duo that broke records during the 70s and 80s with their humor routines, movies and being part of the era of the hippie counterculture, stood out for 2 decades as references of cannabis. Today Tommy Chong, is more current than ever, thanks to the advances that the cannabis culture has had in the world, for the same reason it is not uncommon to see him being a great influencer in the cannabis world among expert and novice users of the herb. 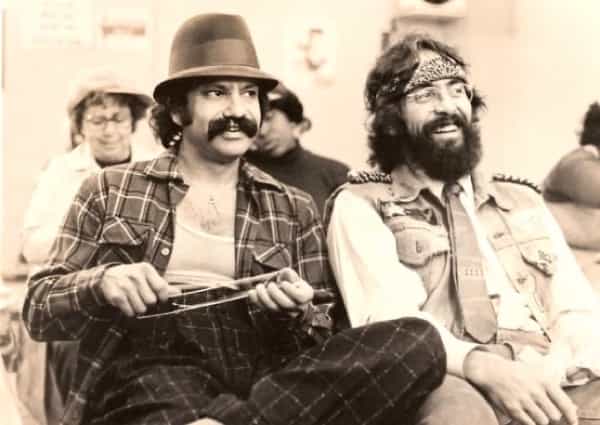 For this reason, we can highlight how Tommy Chong in recent years has collaborated with different brands and companies within the world of cannabis as well, it is possible to see him sharing with weed lovers in different events such as recitals, weed fairs and conferences such as speaker. Chong has never forgotten his 70s and 80s humorous character and love for the marijuana plant, this allows him to enjoy a great reputation among stoners of this era.

Woody Harrelsen also, being an actor, is also a cannabis activist, because he fights for the legalization of marijuana as a member of the advisory board of the National Organization for the Reform of Marijuana Laws. 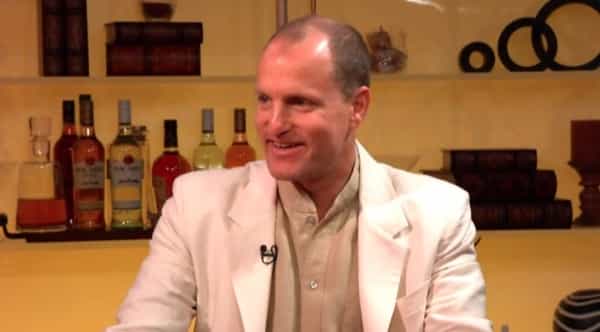 This organization works for the legalization of weed in the USA and also to ensure safe access and also the quality of the weed among recreational and adult pot users. In an interview, from the year 2017, Harrelsen, who had quit smoking, however, in 2019 admitted that he had used marijuana again, after one day meeting another famous cannabis reference such as Willie Nelson.

Willie Nelson, one of the most iconic country singers in the USA, has pointed out his love for weed on different occasions. In an interview I point out that “the biggest killer on the planet is stress and I still think the best medicine is and always has been cannabis,” In 2021 Willie Nelson turned 88 years old and despite the years, he is still a great fan of weed both as an activist and currently an entrepreneur in the pot industry. Willie Nelson’s activism, for ganja, does not stop, for the same reason he is always seen active in forums, as speaker in talks and of course sharing joints with people. 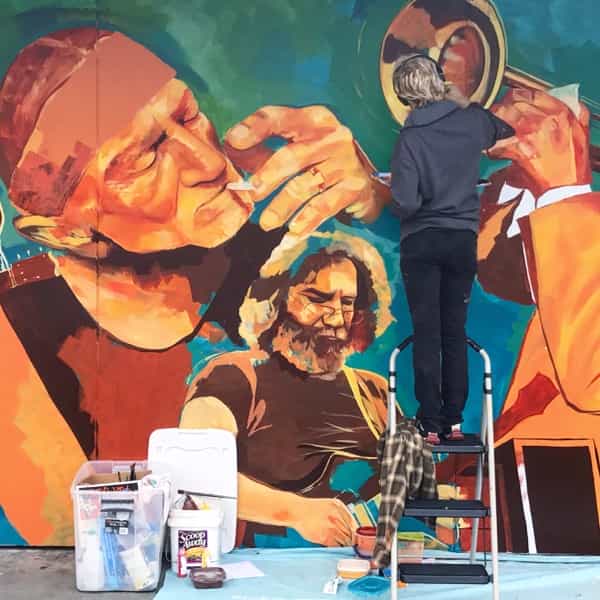 In the autobiography of the country artist, he claims that it was in 1954 when he first tasted a weed joint at the age of 21. Also, it is said that in 1971 he released the first song in reference to weed, the song is titled “In a Memory”. Anyway, these are some of the famous people who have already used cannabis for recreational use, to find inspiration or spiritual connection. There is no doubt that everyone enjoys the benefits of the marijuana plant in a different way.

Nowadays, not only do you need to smoke cannabis as well, you can eat it in edibles and obviously vaporize it or consume it in extracts such as oils. The possibilities of being able to have the best weed medicine or the best recreational pot today are many and practically unlimited. Now, if you want to grow the best marijuana in your garden, don’t forget to buy your feminized or autoflowering cannabis seeds here. We emphasize that in Blimburn seeds bank, shipments are free for the USA, Canada and Europe for the same reason, you can take the best cannabis seeds for expert gardeners and for begginer growers.